Take a journey into our past.

Adelaide’s original Commonwealth Government aerodrome, purchased from Captain Harry Butler, was developed in 1921 on just 24 hectares of land at Hendon (the site of the former Philips factory and SA Film Corporation). Nine kilometres from the city, the aerodrome provided facilities for airmail services between Adelaide and Sydney.

Work on the new airport began in 1947 with flights commencing in 1954 and the first regular transport services in February 1955. Interestingly, the first passenger terminal was a lean-to on one of the large hangars at the airport. It was not until 1957 that the Commonwealth funded and built what was designed only to be a temporary passenger terminal, however its use for domestic and regional traffic continued until October 2005.

Regular International services began in November 1982 with the construction of a separate International terminal building to accommodate an influx of overseas visitors.

Terminal 1 was officially opened by Prime Minister John Howard in October 2005, and provides a considerable upgrade on former airport facilities for regional, domestic and international passengers.

Highlights of Terminal 1 include:

T1 was constructed by the privately owned Adelaide Airport Limited, whose shareholders include Australian superannuation funds.

A memorial building at Adelaide Airport commemorates the first official flight from England to Australia – the Air Race of 1919 with Adelaide brothers Ross and Keith Smith. The restored Vickers Vimy converted bomber (Registration G-EAOU) flown by the famous aviators is housed inside the building for public display.

The epic long distance flight was made just 16 years after the Wright Brothers flew the first-ever powered aircraft.

The Vimy crew set out from Hounslow, London on November 12, 1919, and reached Darwin 28 days later to claim the £10,000 Commonwealth Government prize as the first Australians to fly from England to Australia in less than 30 days. The Smith Brothers were knighted by His Majesty, George V, on December 22, 1919. Sir Ross was born at Semaphore and Sir Keith in North Adelaide.

Flying with the Smith Brothers on their epic journey were mechanics Sergeant J. M. Bennett of St Kilda, Victoria, and Sergeant Wally Shiers of Stepney, SA. Both mechanics received bars to their Air Force medals and promoted to the rank of Lieutenant.

Adelaide Airport and Arts SA worked together to develop the new Vimy Walk – stretching from Terminal 1 to the Memorial building – marking each stopping point that the Vimy made on its epic route to Australia. Don’t forget to have a look on your next visit.

If you have a chance to visit our bathrooms you will notice a large mural of Sir George Hubert Wilkins in the men’s bathroom and Nancy-Bird Walton in the ladies bathroom. Two South Australian aviators who contributed to the global aviation industry.

The graphics were installed in December 2016 and were developed by Nicknack, Adelaide Airport’s creative partner. The graphic consists of two components: a portrait illustration of the personality which is superimposed on an old map of Adelaide, to show the South Australian connection.

A pioneering Australian aviator and the founder and patron of the Australian Women Pilots’ Association. Defying the traditional role of females of her time, she became a fully qualified pilot at the age of 19, and became the youngest Australian woman to gain a pilot’s licence.

Born at Mount Bryan East, South Australia, Sir Hubert was knighted for making the first ever trans-Arctic flight, soon after which he completed the first Antarctic flight. Skilled with a camera, he is also the only Australian official photographer from any war to have received a combat medal (the Military Cross). 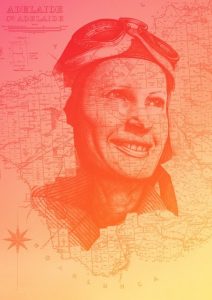