Custodians of our State’s historic contributions to aviation.

Adelaide Airport has had a short yet vibrant history as South Australia’s domestic and international gateway for nearly 60-years. In that time, the airport has substantially expanded and the infrastructure evolved to service the rapidly expanding aviation industry.

The Vickers Vimy aircraft, flown by brothers Sir Keith and Ross Smith in the famous London to Australia air race of 1919-20, is housed in a purpose-built, climate-controlled facility on airport. AAL will continue to ensure it is routinely monitored, maintained and restored in accordance with Commonwealth requirements to protect its heritage value and uphold its significance to the South Australian and broader aviation community.

Join Ross Smith and his crew as they tell the tale of the Great Air Race from England to Australia in 1919, with our interactive trail. Using your smartphone, scan the QR code at Adelaide Airport to begin the journey. The QR code is located between WHSmith and the taxi collection zone. The location is also shown below within the map.

The interactive trail will only work if you are at Adelaide Airport.

Once you have scanned the QR code, head South and follow the interactive trail with Ross Smith and his crew as your guides. 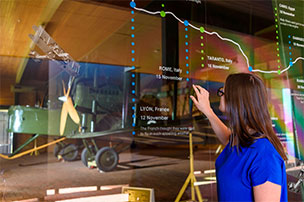 As the trail concludes, you’ll be greeted by the Vickers Vimy herself. The famous aircraft is housed in a purpose-built, climate-controlled facility at Adelaide Airport.